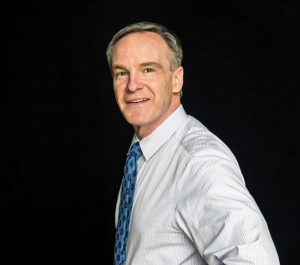 Welcome to the campaign blog of Marc Fliedner for Brooklyn District Attorney. Marc will write regular updates and thoughts from the campaign, sharing ideas and insights. Return here regularly, and share your thoughts in the comments section.

Marc Fliedner, who served as a Kings County ADA from 1987 through 1992 and then from 2006 until last year. He said he plans for a “significant overhaul of the structure of the office.” Eagle file photo by Rob Abruzzese

A Brooklyn-based civil rights attorney and former Assistant District Attorney (ADA) Marc Fliedner announced on Wednesday that he has filed the paperwork with the New York Board of Elections and is expecting to run for Kings County District Attorney in the September Democratic Primary.

“It’s not a formal announcement yet. We’ll do that in a few weeks,” Fliedner told the Brooklyn Eagle. “But I’ve been speaking to folks in neighborhoods throughout Brooklyn and, quite frankly, they are uninspired by the other candidates and they know that I have a very different take.”

Read the full story on the Brooklyn Daily Eagle website.

How to prosecute Donald Trump or another alleged groper

How to prosecute Donald Trump or another alleged groper: A former sex-crimes prosecutor points the way

Donald Trump makes a graphically stated admission to Billy Bush that he has grabbed the intimate parts of women because “you can do anything” when you’re a star. Anderson Cooper asks Trump if the statement is true and he denies it.

Then numerous women, 10 at last count, come forward to publicly state that Trump did in fact have some form of sexual contact with them without their consent.

Trump denies any of it ever happened; he says the women are fame-seeking fabricators he has never even met.

Among the many questions raised by this ugly chain of events: Whether local prosecutors can criminally prosecute an accused perpetrator like Trump for committing acts like those that these women have alleged.

As a former Brooklyn and New Jersey prosecutor who, over 15 years in sex crimes, tried everyone from date rapists to serial child molesters, my answer is a firm yes.

While the precise language varies from state to state, it is consistently true that when someone touches another person’s intimate parts without consent for his own sexual gratification, it’s a crime. Period.

Read the article by Marc Fliedner on the Daily News website.

An NYPD cop was found guilty Friday of “gratuitously” stomping on a suspect’s head like he was a “roach’’ while he was being cuffed during a pot bust gone bad.

Edouard faces a sentence of probation to up to a year in jail at his June 10 court appearance.

Marc Fliedner was prosecutor in the case

Fiery closing arguments made in trial of NYPD cop

The fate of an NYPD officer accused of stomping a man’s head during a 2014 marijuana arrest was debated in heated closing arguments Thursday.

NYPD cop stomped on man’s head during Brooklyn arrest like he was a ‘roach’ he intended to kill, prosecutor says

The trial for an NYPD officer accused of stomping on a man’s head while trying to arrest him began Tuesday with strong opening statements from both sides.

Officer Joel Edouard’s action was like “stomp(ing) on a roach that you intend to kill,” prosecutor Marc Fliedner told the room inside Brooklyn Supreme Court.

Fliedner described the cop as “fueled by his own blind and uncontrolled anger” when he allegedly cuffed and then attacked Jahmiel Cuffee in Bedford-Stuyvesant during a marijuana-related arrest on July 23, 2014.

Liang and his partner were conducting a so-called vertical patrol in the Louis H. Pink Houses in East New York, Brooklyn, when Liang pulled out his service revolver and pushed open a door leading to a darkened stairwell, according to a press release by Brooklyn District Attorney Ken Thompson.

CNN reports that Assistant District Attorney Marc Fliedner told jurors during the trial, “In fact, instead of calling for help, he just stood there and whined and moaned about how he would get fired.”

Officer Peter Liang, who shot and killed an unarmed man in a New York housing project stairwell in 2014, was found guilty of manslaughter and official misconduct on Thursday.

As the verdict was read, Liang dropped his head — his hands around the back of his neck — as one of his attorneys comforted him.
The rookie cop was fired after the highly unusual conviction of a police officer for the shooting death of a civilian.
…
The prosecutor has accused the rookie officer of recklessly shooting into a dark stairwell “for no reason.”
“Then, instead of doing all that he could to help Akai Gurley, he wasted precious time arguing with his partner about calling for help,” Assistant District Attorney Marc Fliedner told jurors last month. “In fact, instead of calling for help, he just stood there and whined and moaned about how he would get fired.”
Read the story and watch the video on CNN’s website. 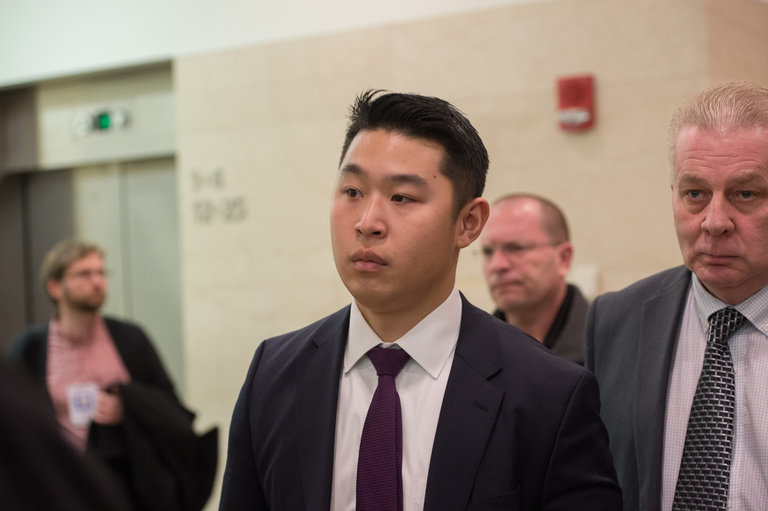 At about 11 o’clock on the night of Nov. 20, 2014, Melissa Lopez was in her kitchen in the Louis H. Pink Houses in East New York. Her partner was getting ready for his workday, which started at midnight, and her two girls were in their rooms.

She heard a single gunshot from the stairwell, which was next to her apartment. A couple of minutes later there was a knock at her apartment door.

“I paused for a second; me and my husband looked at each other,” she testified Monday in State Supreme Court in Brooklyn. When she looked through the peephole, she saw a woman she knew from the building, Melissa Butler.

“Akai Gurley is dead today because he crossed paths with Peter Liang, who is sitting here,” Marc J. Fliedner, a prosecutor who is the chief of the civil rights bureau at the Brooklyn district attorney’s office, said in his opening statement, which at one point found him on his knees, demonstrating how Ms. Butler had bent over Mr. Gurley’s body.

Read the full story on the New York Times website.

Mashawn Sonds, 26, (in gray sweater) claimed that he knew a juror in his trial. (BYRON SMITH/FOR NEW YORK DAILY NEWS)

Before a Brooklyn man was sentenced to 20 years in prison for seriously injuring a transgender woman, he made a last ditch effort to throw out the verdict by revealing he knew a juror.

Mashawn Sonds was quickly found guilty by a jury last month for swinging a two-by-four piece of plexiglass at Kimball “Kimy” Hartman’s head in October 2014 after his co-defendant Tyquan Eversley verbally and physically assaulted her with anti-gay slurs.

Sonds faced up to 25 years in prison for first-degree assault as a hate crime charge, but Assistant District Attorney Marc Fliedner recommended for Justice Danny Chun to sentence Sonds to 20 years.