Hate Unleashed: The Need for a Hate Crimes Bureau

We all know what led to this, and the impacts are being felt throughout the nation, Brooklyn included. People with hate in their hearts now feel empowered to not only spew vile words at others, but also to cause them harm for simply being who they are. In the world’s most culturally diverse community, a community where our differences have so often been embraced and celebrated, the District Attorney’s response to hate crimes must be swift and sure.

It’s shocking then, that at such a critical time, the Acting District Attorney has chosen to downgrade the size and scope of his hate crimes unit.

Under my leadership, the Brooklyn DA’s office will have a free-standing Hate-Crimes Bureau with courageous management, experienced attorneys and specially trained investigators. Victims of hate crimes endure a unique kind of trauma that is directly linked to personal and cultural identity. They must have access to safe and quick avenues of reporting hate crimes and to the Special Victims counselors who will provide support in the aftermath of a hate crime.

Where a case is first reported to New York City’s fine, hard-working Hate Crimes Unit, the DA’s office will partner with them to solve the crime and prosecute quickly. Where the case comes directly to the DA’s office through the Project Safe Here hotline, the Hate Crimes Bureau will investigate immediately. Any Hate Crime statute violations will be prosecuted aggressively.

The most important resolution of a hate crime trial is for the victim to feel that justice has been served and for the community to feel safe in their homes, on their blocks, and in Brooklyn. That is why the victim must be kept informed and given a voice as criminal proceedings unfold.

Of course, the best way to deal with hate crimes are to prevent them from happening at all. That is why, as DA, I will be partnering with researchers at the university level to develop statistical information about the connection between mental illness and hate-based actions. This is work that will not just benefit Brooklyn, but will inform the conversation about hate crimes on a national level. Brooklyn, FIRST and BEST.

Currently there are people in our communities, often the most vulnerable people, who seriously need to question whether they should call the police when they are in trouble. These are victims of hate crimes, human trafficking, and other crimes who are afraid that if the NYPD shows up, they might be deported or otherwise harm their immigration status. We cannot allow the most vulnerable people in our communities to worry about what happens if they are a victim. That’s why Marc developed Project Safe HERE in order to ensure the safety of those nervous to go to the police.

It is absolutely vital that the first priorities of the District Attorney are safety and justice. This means ensuring that victims of crimes do not have to suffer in silence no matter what their immigration status is. That is Project Safe HERE.

The Role of the District Attorney 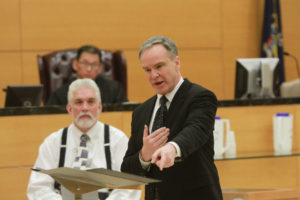 people often confuse the words “prosecutor” and “persecutor.” This misconception about the prosecutor’s role causes folks to avoid or absent themselves from the system, particularly those who need to access it the most. If the most disenfranchised of us decide that the system can’t work for them, their only alternative is to operate outside the system or wait for the day that the current system can be replaced. We can’t wait generations for justice and fairness, especially not when there are ways to achieve it now.

Prosecutors are supposed to guard the rights of those who are accused of a crime and those whose lives have been shattered by crime. That does not mean blindly processing all charges initiated by the NYPD, including “broken window” prosecutions that are used as a pretense to profile those from disenfranchised communities (immigrants,the homeless, lgbtq folks, all people of color). Prosecutors have extraordinary discretion, more than anyone else in the system, including the judges. That discretion can and must be used to effectuate criminal justice reform.